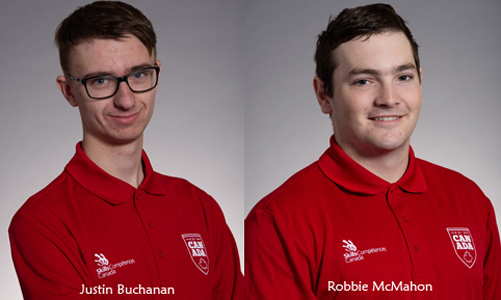 Along with five national medals, for the first time in the history of Skills Canada PEI,  PEI will be represented on Team Canada at the WorldSkills International competition, taking place in Kazan, Russia in August.

Justin Buchanan, a graduate of Holland College’s Video Game Art and Animation program, and Robbie McMahon, a  graduate of the college’s Industrial Electrical Technology program were successful in their run-off competitions, which were held in conjunction with the national competition in Halifax. Both these young men have worked tirelessly over the past year to earn the honor of representing Canada on the world stage.

"This event is the Olympics of Trades and Technology, These students and apprentices have worked countless hours preparing for competition. To have representation on Team Canada is recognition of the calibre of talent we have here on PEI. Our students were competing against the very best from across Canada, the competition was very stiff, and the entire team has done the Island proud." - Tawna MacLeod, Executive Director of Skills Canada PEI

Over its 50-year history, the World Skills Competition has come to symbolize the pinnacle of excellence in vocational training. Every two years hundreds of young skilled people gather together from around the world to compete before the public in the skills of their various trades and test themselves against demanding international standards. They represent the best of their peers drawn from regional and national skills competitions held in over 75 WorldSkills Member countries and regions. Buchanan and McMahon will spend the next 10 weeks preparing to compete at the WorldSkills stage.

“Team PEI’s success demonstrates that Island students have what it takes to succeed and thrive,” said Dr. Sandy MacDonald, president of Holland College. “Well-trained young people are the key to thriving communities. Holland College is very pleased to be a major partner of Skills Canada PEI in supporting their efforts to promote trades and technology to youth”

Each year Skills Canada PEI organizes provincial competitions in 40 areas of trades and technology competitions. The winners of these competitions form the P.E.I. delegation for the national event.

The 2020 National Skills Competition takes place in May 2020 in Vancouver, British Columbia.