For Corbin MacAulay, a safety car may have been his saving grace.

After qualifying on pole and surviving a pair of early spins, the Hurricanes eMotorsports driver fought back and survived a late charge from Zach Sullivan to pick up his fourth victory of the Canadian eMotorsports Network Formula 1 Series season at the Logitech Gaming Hungarian Grand Prix.

MacAulay’s victory cuts Sullivan’s lead to four points in the drivers’ standings, while Ares Racing driver Darcy Ford, who finished third in the race and grabbed the bonus point for fastest lap (1:18.299 seconds), is 22 points back of the lead in third.

Mark Cox put together a fourth-place finish in his MCRaceLab Honda, while Alpha Flow’s Michael Dimitroff and the 519 E-Racing Bugatti battled back and forth for the majority of the race to finish fifth and sixth, respectively.

Daniel Cudmore came home ninth in the second Alpha Flow Honda, and Colin Doran finished 10th to score his first point of the season in the second Hurricanes eMotorsports Honda.

North Border Racing continues to lead the constructors’ table with 159 points, though their lead over second-place Hurricanes eMotorsports was cut to 19 points.

The virtual Hungaroring proved to be a challenge for the drivers, though MacAulay took his seventh straight pole with a time of 1:15.087, over a second clear of Dimitroff in second.

With the majority of the front-runners beginning the race on soft tyres, there were plenty of early pit stops as the softer compound got chewed, enabling Ford to move up to the lead early after qualifying eighth, building a gap of nearly 24 seconds on the field.

However, a crash on Lap 14 involving Blake Bernard of I-B-PRO-FUN Motorsports brought out the safety car, prompting Ford to pit for soft tyres while the rest of the field opted for either medium or hard compounds. Though Ford rejoined in the lead and built up a sizable gap, the tyre choice meant he had to pit again at the end of Lap 26 and conceded the lead to MacAulay, who would not relinquish it.

The second half of the Formula 1 Series season begins next Thursday, October 29, at one of Formula 1’s most iconic tracks, Spa-Francorchamps, for the Fix Auto Charlottetown Belgian Grand Prix, which will be streamed live on the Canadian eMotorsports Network Facebook page. 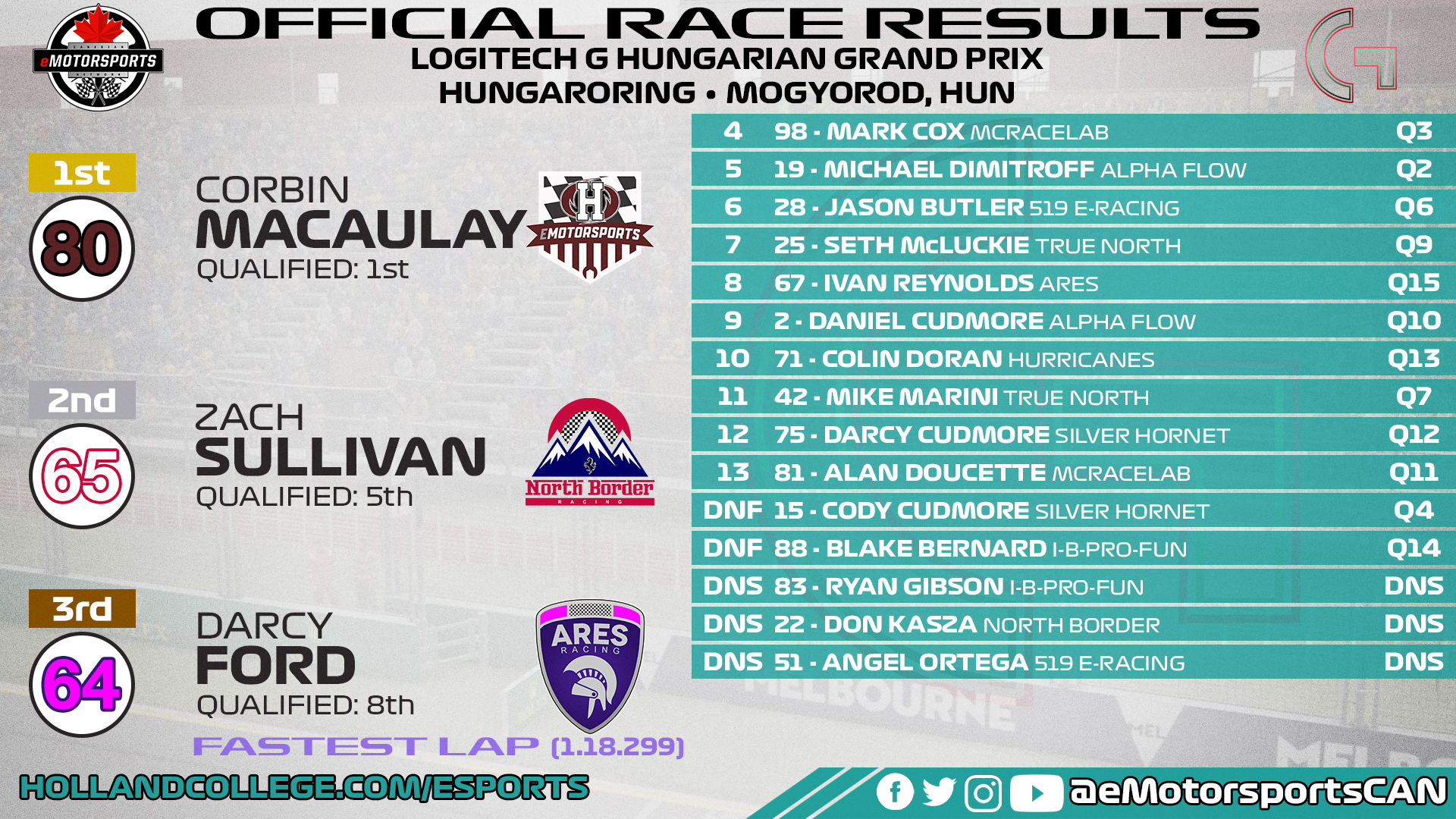