MacAulay comes up clutch in Fix Auto 250 at Martinsville

The final-four drivers are set to compete for the Series Championship following the Fix Auto 250 on Tuesday night at the Martinsville Speedway; it was the final race in the Round-of-8 and the 25th of 26 races during the 2020 Canadian eMotorsports Network NASCAR Series season.

With Ryan Gibson (West Virginia, USA) and Scott Bailey (Michigan, USA) already locked in for the championship race following their wins in the opening two races of the Round-of-8 (Kansas and Texas respectively), all eyes were on the remaining six playoff drivers on Tuesday night.  In the end, Corbin MacAulay (PEI, Canada) of Hurricanes eMotorsports found his way to victory lane for his third win of the season.  MacAulay entered the race in a must-win situation, sitting in fifth place in the standings prior to the green flag.

MacAulay would qualify fifth and battle with fellow playoff driver, Mike Marini (Ontario, Canada) for the majority of the race, before making the pass in the final laps for the win.  MacAulay would win the first stage with Marini winning the second.

Rounding out the top-five in the race was Jose Mercado (Florida, USA) in third, Darcy Ford (PEI, Canada) in fourth and Gibson in fifth.

Ford qualifies as the fourth driver for next weeks championship race; he ended the round 14-points ahead of Mercado in fifth. Also being eliminated from the playoffs was Marini in sixth (46-points back), Chad Hyder (Ohio, USA) in seventh (61-points back) and Jacob Nelson (Tennessee, USA) in eighth (97-points back).

The final race of the 2020 season takes place on Tuesday, November 17; the Canadian Championship presented by Keep It Social at the Phoenix Raceway.  The highest finisher of the final-four drivers will be crowned the inaugural Canadian eMotorsports Network NASCAR Series champion.

Here is are the full results from the Fix Auto 250 on Tuesday night. 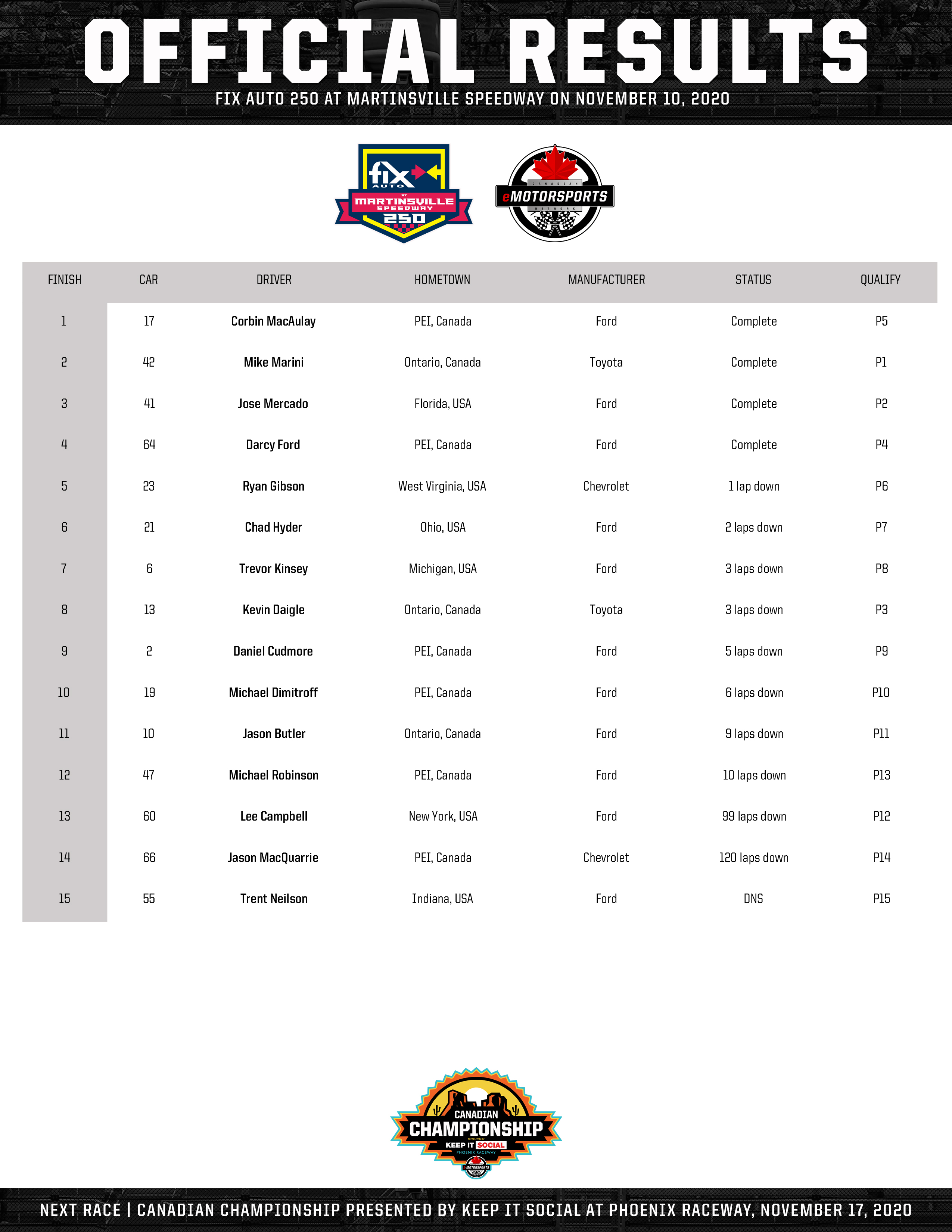 Here is a full breakdown of the playoff standings following the Round-of-8. 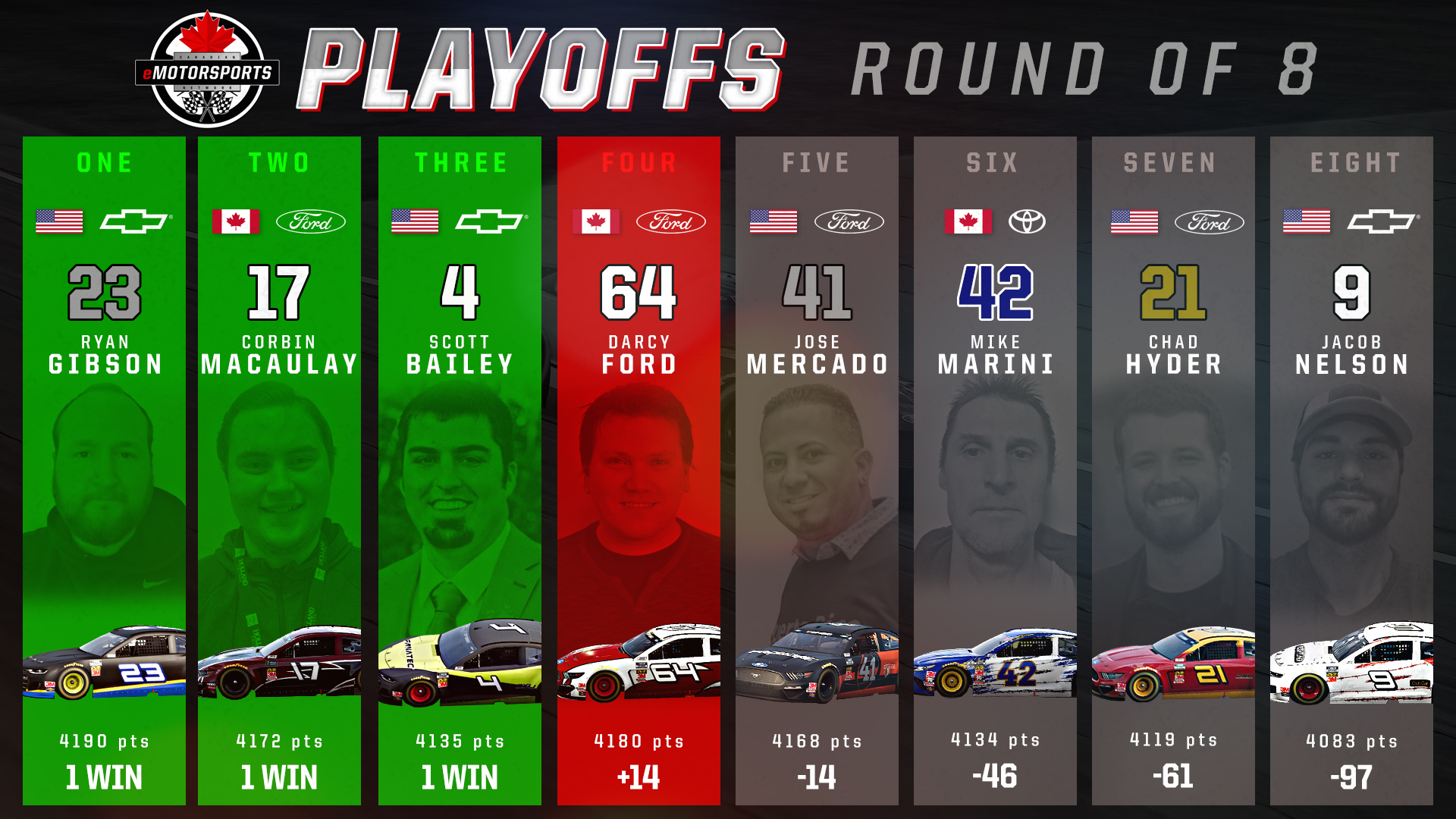 Also awarded on Tuesday night was the Fix Auto Cup; awarded to the driver that accumulates the most points during the six Fix Auto sponsored races in 2020 (Charlotte, Indianapolis, Dover, Darlington, Talladega, Martinsville).  The inaugural recipient was Darcy Ford of Atlantic Motorsports.

Here is a full breakdown of the 2020 Fix Auto Cup. 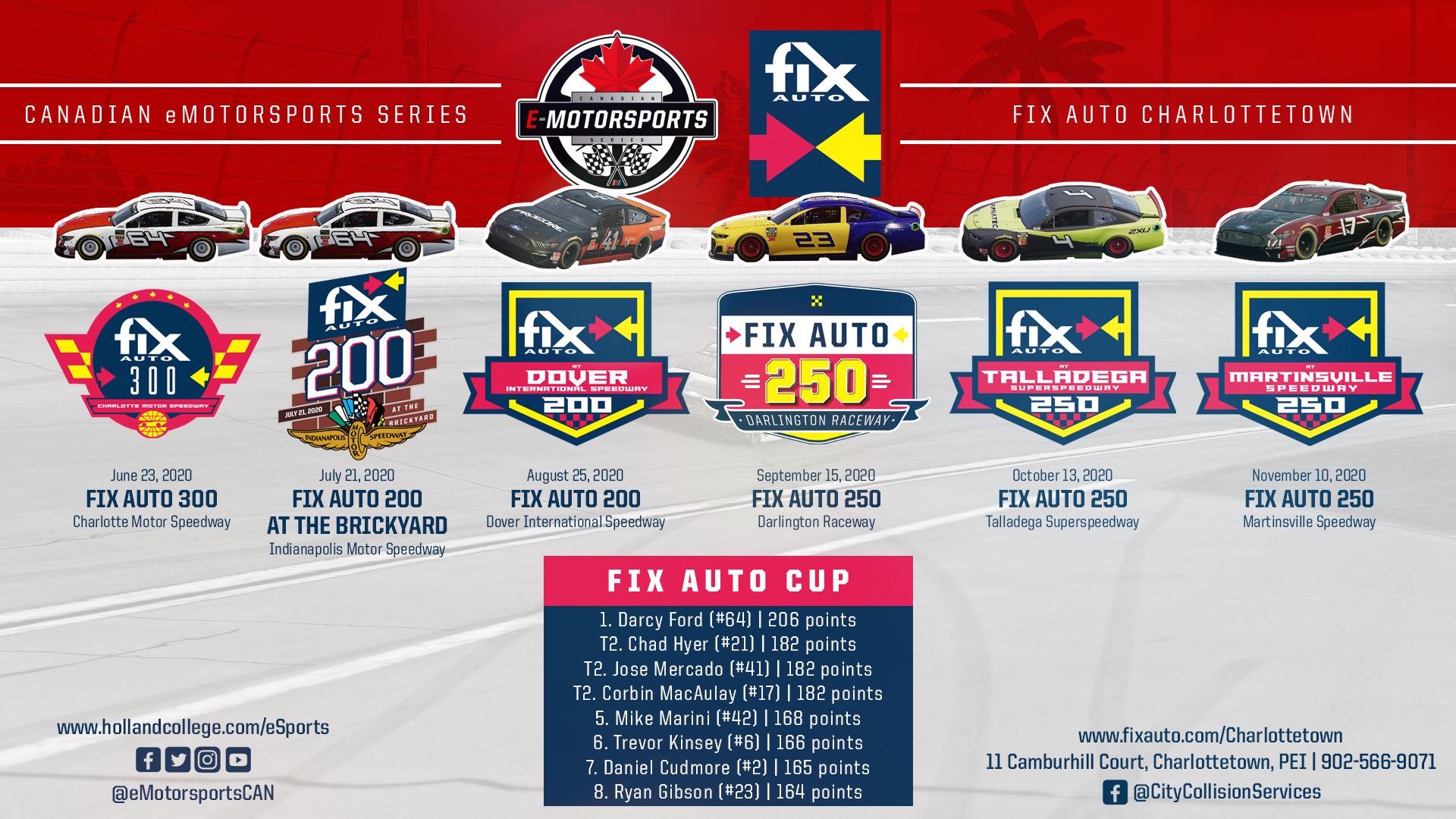 For more information on the Canadian eMotorsports Network, visit www.hollandcollege.com/eSports.